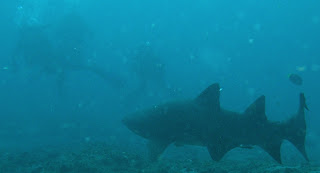 I distinctly remember the first time I came to visit what is colloquially referred to as “the Shoal” by your average local diver. It was a last minute decision that would have a far reaching influence on my life. No really, I mean it!
Basically, my travel companion at the time (you know who you are) and I were travelling through Southern Africa in the winter of 2011. It was early July, we were in Lesotho and it was cold, really cold!
Trying desperately to warm up by a fire, we got to talk with some people who advised diving the Aliwal Shoal. We were looking for an excuse to expedite our return to a warmer part of Southern Africa, this seemed like a superb opportunity.
Long story short, a couple of days later, we booked with Aliwal Dive Centre and arrived in the late afternoon, eager to dive the next day. We weren’t very experienced divers at the time and it was going to be our first time exploring the Indian Ocean.
That morning, we took to the beach and were greeted by the legendary surf here. The local skippers are either savants or totally insane, but they make wading through it look like the simplest of tasks. After reaching backline, it was a matter of minutes before we were back-rolling into the blue. Destination: Raggies cave.
Seeing ragged tooth sharks for the first time is spectacular, seeing so many at once is extraordinary! The cave was alive with them. Visibility was a reasonable 10-15 meters and we were enjoying ourselves tremendously. We felt on top of the world, which is ironic because we were below the surface of the ocean – but I digress – and reluctantly tore ourselves away from our vantage point as the time to surface drew near.
Sitting on the boat feeling al happy, I did not yet know this specific dive would be a pivotal moment that would impact my future career as a diver tremendously. We’re now in 2013 and I’m back in Umkomaas for the 4thtime. I’ve become a Dive Master here, made some good friends and consider this place to be my home away from home.
If the world is my oyster, the Aliwal Shoal is my pearl! I hope to see you very soon at the launch site! And after the dives, I’ll explain to you why French fries aren’t really French to begin with! My name is Johan, I’m from Belgium and I’ll be a dive master here for a little while longer.