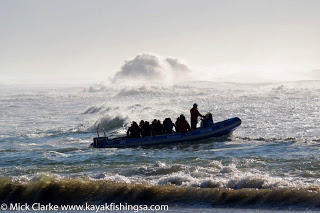 Oh Gust!
The phrase where the month of August got its name from, I’m certain.
Howling winds in the 20-30 knot range.  One day from the east, next day from the west. It’s like watching a Wimbledontennis match. With the ball never being out.
I was sitting out on the reef (on a boat, obviously – otherwise I would sink) in the middle of this tennis match one day when I saw the whole town of Margate (to the south of us) come flying past me, trailing a couple of cars, a block of flats and only three houses (weird that – thought there would have been more), a semi truck and a Metro train, complete with conductor hanging on.  Knowing what month this was though, I wasn’t too worried or surprised, because I knew the next day it will be blown back down south again. And it was, followed by the whole town of Richards Bay (to the north of us).
This time round, I must admit, Margate looked a bit worse for wear, and the conductor was missing.  The next day Richards Bay tumbled back north again, and so on.
This is not a Tale of Two Cities, albeit perhaps a tall one.
But I do think I am getting the point across. Am I?
Historically it’s always been a risky time for attempting to dive, as the weather can really throw you a curve ball and the sea can get a bit “on”. We did however succeed in fulfilling nearly all of our obligations to our customers to get them out there, under there and back again safely.
The current was predominantly reverse, and the visibility ranged from 6-20m, most days being 8-10m.   Temperature was, for August, a warm 21-22 degrees Celsius.
We also experienced some huge westerly groundswell, especially on the 24th, when I recorded 7m swells out at sea. It was very impressive to watch waves 6-7m high break three deep along the entire length of the Shoal, bowling top to bottom on the Pinnacle Ridge, all the way down to Eelskin. It looked like the surf zone.
If you are wondering ‘so where did you dive?’ and before you start accusing me of exaggerating – which I NEVER doJ, we did a baited shark dive in 35m of water. Any reef structure shallower than 25m had waves breaking on them. Very impressive and something I haven’t experienced in years – and oh yes, the launch was a slight adrenalin rush too!
(That is a VERY high spray off a broken wave … Picture courtesy of Mick Clarke)

All being said a good busy month for us with a lot of dodging waves and wind!
Now don’t let this put you off, come experience an adrenalin rush – at no extra charge!
Besides, we are now officially in Spring, so spring out of your chair and get rushed!
Enjoy our oceans,
Basie